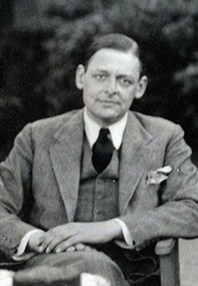 Thomas Stearns Eliot was born in St. Louis, Missouri, in 1888. He attended Smith Academy in St. Louis and then the Milton Academy in Massachusetts, as his family was originally from New England. Soon after the turn of the century, Eliot’s poems and short stories began to be published, and writing became his lifework.

Eliot began courses at Harvard University in 1906, graduating three years later with a Bachelor of Arts degree. After graduating, Eliot served as a philosophy assistant at Harvard for a year, and then left for France and the Sorbonne to study philosophy.

From 1911 to 1914, Eliot returned to Harvard to study Indian philosophy and Sanskrit. He finished his advanced degree at Harvard while in Europe, but due to the onset of World War I, he never completed his final oral exam for his Ph.D. He married Vivienne Haigh-Wood and took a job in London, England, as a teacher. Not long after, he became a bank clerk at Lloyds Bank of London—a position he would hold until 1925. Eliot left Lloyds to join the publishing firm Faber and Faber, where he remained for the rest of his career, eventually becoming a director. At Faber and Faber, he was responsible for publishing English poets like W.H. Auden, Stephen Spender, and Ted Hughes.

On 29 June 1927, Eliot converted to Anglicanism , and in November of that year became a British citizen.

For many years Eliot had suffered from lung-related health problems. He died of emphysema at his home in Kensington in London, on 4 January 1965. In accordance with his wishes, his ashes were taken to St. Michael’s Church in East Coker, the village in Somerset from which his Eliot ancestors had emigrated to America. A wall plaque there commemorates him with a quotation from his poem “East Coker”, “In my beginning is my end. In my end is my beginning.”

Eliot published his first poetic masterpiece, The Love Song of J. Alfred Prufrock, in 1915. His first book of poems, Prufrock and Other Observations, followed in 1917, and the collection established Eliot as a leading poet of his day. While writing poetry and tending to his day job, Eliot was busy writing literary criticism and reviews, and his work in the criticism field would become as respected as his poetry.

The Waste Land, Eliot’s complex poem about postwar disillusionment, was published in 1922. At the time he wrote the poem, Eliot’s marriage was failing, and he and his wife were both experiencing “nervous disorders.” The Waste Land garnered critical praise from all literary corners, and it is often considered the most influential poetic work of the 20th century.

The same year The Waste Land was published, Eliot founded Criterion, a journal that would become quite influential in the literary field. The poet edited the journal from 1922-1939. Two years later, Eliot joined publishing house Faber & Faber, where he would remain for the rest of his career, shepherding the writing of many young poets.

Eliot’s major later poems include Ash Wednesday (1930) and Four Quartets (1943). He also wrote The Use of Poetry, The Use of Criticism (1933), After Strange Gods (1934) and Notes towards the Definition of Culture (1940). For his vast influence—in poetry, criticism and drama—T.S. Eliot received the Nobel Prize in Literature in 1948.

Eliot was born into an old New England family and came with his family to their summer home in Gloucester from the age of five until he went off for his year of study in Paris. After graduating from Harvard, he paid a few short visits to Gloucester on his rare trips back home. This amounted to some 20 summers spent on Cape Ann and Eliot’s work reflects a deep affection for this area. He learned to sail here and became very familiar with the waters surrounding the island.

The family summered in a vacation home on Eastern Point built by Eliot’s father. The house was, and still is, located on Edgemoor Road. The road was named for the moor it bordered which, in Eliot’s day, swept down to the sea. The house was built to have commanding views of the sea from every window and it is not surprising that the Eliot family hurried out of their St Louis home each year to spend a long summer by the sea.

Gloucester is referenced a great deal in Eliot’s work–both literally and figuratively. He first mentions Cape Ann in a poem called by that name published in 1935. Cape Ann was later incorporated into the series of minor poems, Landscapes. The Dry Salvages, the third poem in the Four Quartets, is named after a rock formation near Gloucester. During the writing of The Dry Salvages, Eliot began the conscious formation of his four poems into the Quartets. The Dry Salvages was written and published in 1941 during the air-raids on Great Britain. The title comes from the name of a rock formation near Gloucester. In a head-note to the poem, Eliot describes this formation: “The Dry Salvages…is a small group of rocks, with a beacon, off the N.E. coast of Cape Ann, Massachusetts. Salvages is pronounced to rhyme with assuages”.

The Dry Salvages is probably the harshest of the Quartets. The Quartets has an elemental scheme, and the major element in The Dry Salvages is water — the water that births us, carries us, drowns us. “The river is within us, the sea is all about us….” The poem also alludes to various images associated with fishing and the sea: wastage, shipwreck, destruction — the broken net, the bone on the beach, and the terrible anxiety of the sailor’s wife. “Where is there an end to the drifting wreckage?” For Eliot, who had converted to Christianity in 1927, the end was beyond — with God.

It has been more than seven decades since the first publication of T.S. Eliot’s Four Quartets. Over time, the poem has been increasingly recognized as the poet’s magnum opus, his most impassioned attempt to find meaning in a world badly traumatized by two world wars. It’s a dark poem , at times ecstatic and intensely spiritual, and has been a source of inspiration and solace for many. In September of 1999, the T.S Eliot Society held their annual conference in Gloucester in celebration of Eliot’s years on Cape Ann and this area’s influence on the author.

There are many items by or about T.S. Eliot in the collections of the various public and academic libraries of NOBLE.

Works by Eliot
Works about Eliot