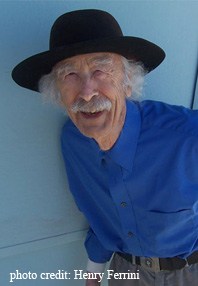 Vincent (Vinanzio) Ferrini was born June 24, 1913 in Saugus, Massachusetts to Italian immigrants Giovanni Ferrini and Rena DeCarlo. His father was a shoe factory worker in Lynn, and the family struggled with poverty and other difficulties, including the death of his baby sister. The socialist movement prevalent in the Italian immigrant community at the beginning of the twentieth century and the destructive force of the Great Depression made a lifelong impression on Ferrini, with their influences being felt throughout his writings.

In 1941 he published his first book of poetry, No Smoke, which reflected on his past experiences and his life as a factory worker at General Electric Lynn plant. He married Margaret Duffy in 1942 and had a son and two daughters. The family moved to Gloucester in 1948. He felt an immediate affinity to the hard working and hard living community. He started a frame shop, bringing him in close contact with the active artist community, as well as being a visitor to the lively waterfront of fishermen and the factory workers at the local fish processing plant. Over the years he wrote many volumes of poetry and a few plays, nearly all influenced by the social issues he saw around him. His youngest daughter, Deirdre, died of leukemia in 1963, and his marriage to Margaret ended. He was married again, to Mary Shore, but that marriage also ended in divorce.

Ferrini’s presence loomed large on the Gloucester literary scene. He had a precarious relationship with Charles Olson, one that had a mixture of respect, competition, and criticism. Many important contemporary literary figures, such as Lawrence Ferlinghetti, Jack Kerouac, Allen Ginsberg, and Robert Creeley, came to Gloucester to visit both authors. Once the competing figure of Olson had dissipated with his death, Ferrini reigned as the premier local literary character. This cumulated in Ferrini being named Poet Laureate of Gloucester in 1998. The writer was so revered in the community that after his death the Gloucester Writers Center is housed in his former home. Vincent Ferrini died on December 24, 2007 at the age of 94.

“I am the poem… I’m the art. I’m the art of living.” — Vincent Ferrini in Poem in Action

Vincent Ferrini was described by Walter Lowenfels as “the last surviving Proletarian Poet.” Ferrini’s background, as a son of a factory worker and having been a factory worker himself, infused his poetry with the concerns of the everyday laborer. His political activism in the Communist Party in the early part of his life informed his thoughts as well. He was self-taught, using the public library as his school, and thus developed an individualistic style reflecting many concepts from Plato to Marx to American Transcendentalism to the teachings of Jesus Christ.

His first book of poetry, No Smoke, published in 1941, detailed the effects of poverty, labor woes, and other social ills that he observed around him during the Depression. The book, about the plight of the Lynn factory workers and the conditions imposed on them by the industrial social structure they lived in, is reminiscence of the Edgar Lee Masters’ Spoon River Anthology. Through the intimate examination comes the political and social injunctions Ferrini wished to convey.

After Ferrini moved to Gloucester in 1948, he opened a frame shop. While this was still manual labor, it was to bring him into the world of the artist community that had long thrived in Gloucester. Along with his own writing he helped edit a literary magazine, Four Winds, from 1952 to 1954. It was this publication that caused Olson to write a scathing letter in the Maximus poems (letter 5), in which he expressed his disdain for the quality of the publication. There was a rivalry between the two men that lasted until Olson’s death in 1970.

He also gravitated to the fishing community. Know Fish is the sweeping epic work of Ferrini’s time in Gloucester — the title revealing the essential poetic philosophy of Ferrini, to cull from the intimate the all-encompassing. In the film Poem in Action, he states, “I’m taking away the emphasis upon poetry as a special category… it’s a heightening of the process of awareness.” To Ferrini, poetry was not just a descriptive process to elicit thoughts or feelings, but a part of living a contemplative life.

Ferrini’s style is hard to categorize. Without a formal academic background Ferrini developed an individualistic style. His poetry can be viewed to have a simplicity in its form, and the subjects tended to be based in everyday reality. But that simplicity does not mask the complexity of meaning. Some critics have voiced a reproach for repetition and for a certain amount of self-indulgence in Ferrini’s poetry. But nobody denies the overall talent or genuine worth of his work.

Know Fish is an epic suite of poems about the everyday life of Gloucester fishermen, the workers of the surrounding industries, and local issues of the day. About it Ferrini wrote, “The thrust of the whole work is in the title, knowing fishes, in men, women, and the sea. The pitch is that only when we connect with the interior of fishes are we discovering and extending life, by the innate rules of Earth, and thereby saving the self, the family, the city, and the planet.” This encapsulates the philosophy of Ferrini’s poetic style — that poetry is not some separate observational process but an amplification of life itself. By highlighting the issues of the community through his poetry in an intimate voice will come a better understanding and an impetus for change for not only that community, but the world at large. The place, the people, the social dilemmas, the great concepts, the poetry are all one, intertwined and interconnected.

Know Fish consists of seven books published over several years (1979-1986). The content range from poems in Standard English, to passages written in an Italian-American dialect (meant to be spoken out loud rather than read), to a letter-type format. Charles Olson also wrote in an epic style, using Gloucester as his springboard. Ferrini brings his own voice, and his own perspective to his work. His work had more political commentary. His truth-telling, not only to those in power, but even to those he felt more attuned with, was a virtue of his literary mission. But some critics see a certain self-indulgence in the length, structure and subject matter over the course of the seven books. However, as Kenneth A. Warren and Fred Whitehead highlight in their introduction of Whole Song, Know Fish “attempts to be an encyclopedic record of Gloucester in the late twentieth century.” Ferrini was compelled to continue to put forth his poetic view, despite any overlap of themes. P.J. Laska quotes Ferrini as stating that “[No Smoke] dealt with the city I lived in, and Know Fish is the city I live in.”

There are a variety of items by or about Vincent Ferrini in the collections of the various public and academic libraries of NOBLE.

Works by or about Ferrini