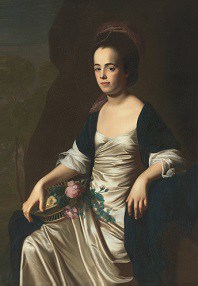 Judith Sargent was born on May 1, 1751 in Gloucester, Massachusetts, one of eight children born to the wealthy merchant family of Winthrop Sargent and Judith Saunders. While her parents were progressive for the times and encouraged Judith’s intellectual endeavors, they refused to provide a formal education for their daughter. Judith was self-taught through the use of her extensive family library. She showed her interest in writing at an early age by writing poetry.

As a young woman Judith Sargent Stevens befriended preacher John Murray on a visit he made to Gloucester, and they corresponded frequently. The Sargent family became followers and patrons of the new religion Universalism, including donating the land on which Murray built America’s first Universalist/Unitarian meetinghouse.

She was married twice, first to Captain John Stevens in 1769, and then after Stevens’ death to the Reverend John Murray, the founder of Universalism in America, in 1788. Throughout both marriages finances were strained, which motivated her to publish to gain income. At age 38, Judith Sargent Murray gave birth to a son who lived only a few hours; in 1791, the year that she turned forty, she delivered her only child, a daughter, Julia Marie. After Murray’s death in 1815, Judith Sargent Murray completed and published her husband’s autobiography. She then moved to Natchez, Mississippi to live with her daughter and son-in-law. She died and was buried in Natchez on June 9, 1820, at age 69.

Judith Sargent Murray was a woman who had an agile mind and a fierce belief in the equality of the female intellect. This was reflected throughout her writings, and brought her prominence during her lifetime.

In 1774 she began copying all of her outgoing letters into blank books before mailing them, including correspondence to some of the most important American citizens of the time, such as President George Washington. Between 1774 and the early 1800s, she wrote over 2,000 letters, giving a rich and full insight to Murray’s thoughts and the time she lived in. Murray saw America not only starting a new type of government, but as a place where a new societal order could evolve and grow — a culture where women were considered equal to men, in rights and in privileges. The Universalist belief in the salvation for all, rather than the Calvinistic divine grace of a select few, led the whole Sargent family to help found the first Universalist church in America. Murray published a Universalist catechism in 1782 which may be the earliest writing by an American Universalist woman. The catechism asserts male and female equality, showing a jointing of her personal beliefs and religious philosophy.

Her first published piece, written under a pseudonym in Gentleman and Lady’s Town and Country Magazine in 1784, was a feminist one: “Desultory Thoughts upon the Utility of Encouraging a Degree of Self-Complacency, Especially in Female Bosoms.” Over the next thirty years Murray published poetry, essays, magazine columns, plays, and books. Although most of her publications were under pseudonyms, it was common knowledge that the works were hers and she received many accolades.

This essay, published in two parts in the Massachusetts Magazine in the March and April 1790 issues under the pen name of Constantia, is one of Murray’s most cited pieces. She uses both logic and humor to make her arguments about the equality of the female intellect.

Murray begins her claim by looking at four aspects of intellectual powers: imagination, memory, reason and judgment. She drolly points out that the imagination used in the acceptable feminine avenues of fashion and verbal coyness shows the female mind more than capable of that intellectual exercise. She also reasons that both elderly men and women are noted for their long memories. Murray then gets more to the central point of the matter by stating that any perceived differences in the sexes in reason and judgment are not intrinsic to the female mind itself, but due to the lack of educational background and opportunities for intellectual exchange that men possess; “one is taught to aspire, and the other is early confined and limited.” The effects of the lack of education is felt throughout a woman’s lifetime. Murray writes that if she is “single, she in vain seeks to fill up time from sexual employments or amusements. Is she united to a person whose soul nature made equal to her own, education hath set him so far above her, that in those entertainments which are productive of such rational felicity, she is not qualified to accompany him. She experiences a mortifying consciousness of inferiority, which embitters every enjoyment.”

Murray then tries to rebut any arguments against educating females. To the thought that education of females is a waste and a distraction to the domestic duties they must attend, she states that domestic tasks leave plenty of mental space for contemplation and study. Murray belies the nonsensical logic in the contention that since males are physically superior they then must also mentally superior by pointing out intellectually admired men are not necessarily the most physically superior. She boldly asserts a rather modern notion — that by educating females they will make better partners in life and better human beings in society. “Females would become discreet, their judgments would be invigorated, and their partners for life being circumspectly chosen, an unhappy Hymen would then be as rare, as is now the reverse.”

In the second part of the essay, Murray addresses what during her lifetime was a very sensitive and thornier issue — religious arguments against the equality of the sexes. After pointing out that both King David and Job were less than perfect, she regresses into a previously made point about how females are primed from childhood to attract a male, and that they could, if allowed, pursue more intellectual endeavors without interfering with their domestic cares. She then returns to answering the religious objections by relaying her thoughts that she sent to a Universalist preacher. Using the expulsion of Adam and Eve from the Garden of Eden, Murray compares Eve’s motivation —- “a thirst for knowledge” —- to Adam’s —- “a bare pusillanimous attachment to a woman.” Murray ends her essay with a tart observation: “Thus it should seem, that all the arts of the grand deceiver (since means adequate to the purpose are, I conceive, invariably pursued) were requisite to mislead our general mother, while the father of mankind forfeited his own, and relinquished the happiness of posterity, merely in compliance with the blandishments of a female.”