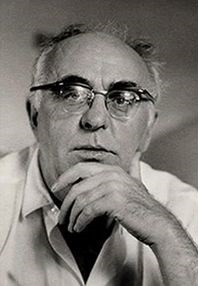 Charles Olson (27 December 1910 – 10 January 1970) was born to Karl Joseph and Mary Hines Olson in Worcester, MA, where Charles’ father worked as a mailman. During his childhood years, the Olson family summered in Gloucester, MA – a place which later became the focus of his writing. In high school, Olson was a champion orator, winning a European tour for his abilities.

He attended college at Wesleyan University in Middletown, CT where he studied Literature and American Studies, receiving both a Bachelor and Masters of Art. After teaching English for two years at Clark University in Worcester, Olson entered Harvard University in 1936, completing his coursework for a PhD in American Civilization but failing to complete the degree. Olson received a Guggenheim Fellowship in 1939 to work on a book on Herman Melville which was eventually published in 1947 under the title Call Me Ishmael. During World War II, Olson worked in the Foreign Language Division of the Office of War Information and later served as adviser and strategist for the Democratic Party’s National Committee but preferred the independence of a writer. He took a brief teaching position at Black Mountain College in 1948 and later served as rector of the school until its closing in 1956. At that point, he returned to Gloucester where his main focus became the Maximus series.

In Gloucester, he chose to live in relative isolation and poverty, leaving only for two brief teaching stints at SUNY Buffalo and University of Cincinnati respectively. Olson died of cancer in New York City, two weeks past his fifty-ninth birthday, having completed the Maximus Poems only a month before. He had two common-law marriages: the first to Constance Wilcock with whom he fathered a daughter, Katherine; the second to Elizabeth Kaiser who bore him a son, Charles Peter. Writing autobiographically, he described himself not so much as a poet or writer but as “an archaeologist of morning” (Collected prose 206). The phrase has remained as a common descriptor for him.

Olson’s critical review of Herman Melville’s Moby Dick, entitled Call Me Ishmael, is widely recognized as a classic in the field of literary criticism. Originally publishing in 1947, it has been republished three times and has received much attention for both its poetic style and its experimental organization. In the book, Olson explores the influences on Melville’s writing –particularly Shakespearean ones—and posits what has become known as “the theory of the two Moby-Dicks”.

For his poetry, Charles Olson has come to be recognized as a major influence in the shaping of postmodern American poetry. He is recognized as a chief successor to Ezra Pound and William Carlos Williams and a leading voice of the New American Poets—a designation which includes the Black Mountain, New York School and San Francisco Renaissance groupings. His place in literary history seems assured by such achievements as his epic series, the Maximus Poems (1953-1975), the theoretical manifesto “Projective Verse” (1950), and essays such as “Human Universe” (1951). Warren Tallman, in his preface to The Poetics of the New American Poetry (1973), refers to the postmodern poets of the fifties and sixties as “Olson’s generation”.

The Maximus Poems are generally regarded as Charles Olson’s major work. They were written over a period of almost twenty years and contain more than 300 poems, varying in length from a single line to ten pages. Considered as an epic of place, the poems specifically concern the city of Gloucester where Olson settled in 1950. The town serves to represent the communal American life that Olson struggled to preserve. Several of the poems take up local issues such as preserving the wetlands and documenting the history of fishermen in the Northeast. Dogtown, the wild, rocky center of Cape Ann, is also an important place in the Maximus Poems. Olson used to write outside on a tree stump in Dogtown. Olson backed up these poems with his own social action — working towards the preservation of historic buildings and local wetlands on his beloved Cape Ann.

Between mid-December of 1962, and his death on January 10, 1970, Charles Olson wrote a total of seventeen letters to the editor of the Gloucester Daily Times. Five of these communications were in the form of poems; the remaining twelve were prose letters. The five poems are included in The Maximus collection. Olson’s letters to the editor of the Gloucester Daily Times parallel certain poems in the Maximus sequence in terms of subject or focus. Olson deals with many of the same subjects or issues, though sometimes differently, in his letters to the editor. Indeed, the letters to the editor should be considered as a corollary text and studied as such. But the letters are also “an attempt to call the people’s attention to a number of pressing issues, from the city’s seeming amnesia regarding her greatest painter, Fitz Hugh Lane (now Fitz Henry Lane), to the consequences of the razing of precious buildings, by urban renewal, or what Olson referred to as ‘renewing without reviewing.'” (see Anastas)

Olson began work on the Maximus Poems in the mid-1940s and continued to expand and revise them until his death in 1970. Some poems stand independently, others depend for their meaning on their context within the series. The Maximus Poems are divided into three volumes, meant to be read as a long, single poem–Olson refers to it as such. The last of the three volumes imagines an ideal Gloucester in which communal values have replaced commercial ones. When Olson knew he was dying of cancer, he instructed his literary executor Charles Boer and others to organize and produce the final book in the sequence.

The Library maintains a collection of over 100 volumes by and about Charles Olson. The collection contains most of Olson’s poetry and prose, correspondence and interviews with the author and a wide variety of biographical and critical texts. The entire collection is housed in the Local History section and may only be used within the library. However, duplicates of many of the volumes are located on the Gloucester Shelf and may be checked out.

MAXIMUS TO GLOUCESTER
The following letters and poems were written by Charles Olson to the editor of the Gloucester Daily Times (1962-1969) which is available on microfilm in the Local History section: